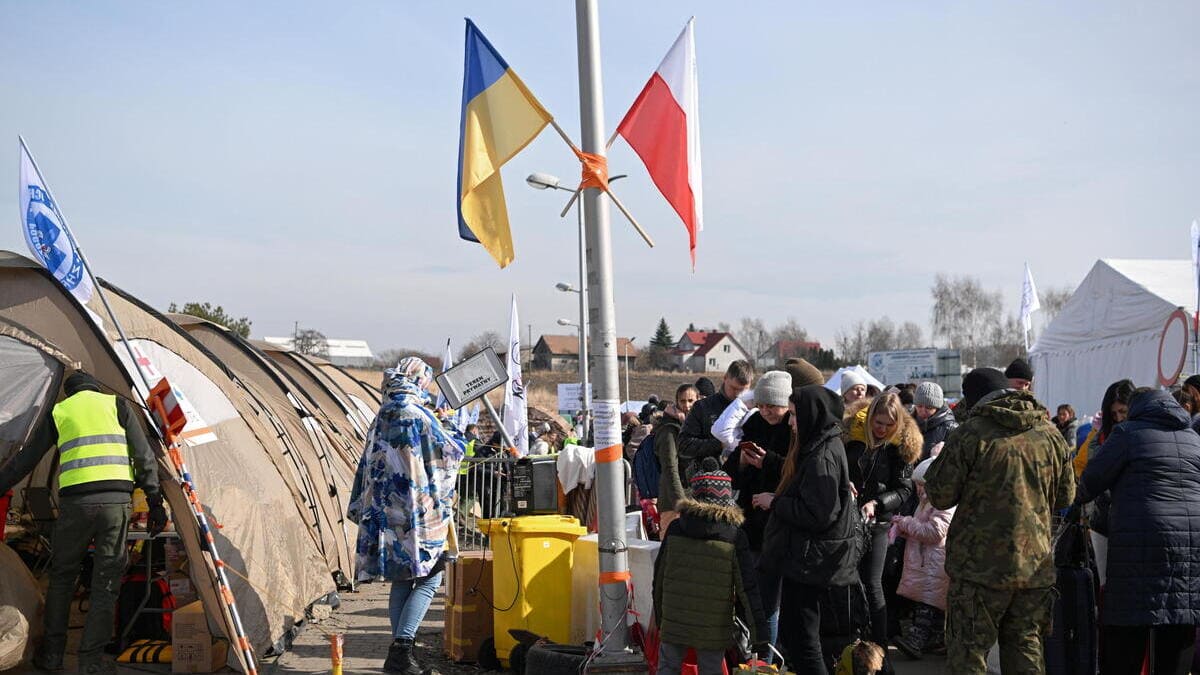 Resonances of war in Europe: of refugees, solidarity and double standards

The war in Ukraine has triggered various reactions across Europe. To better understand the situation, we interviewed Dorota Dakowska, researcher and professor at Sciences Po Aix.

Dorota Dakowska is a researcher and professor currently working at the Department of Political Science, Sciences Po Aix, in France. She is an expert in Higher Education transformations, Political Organizations, Foreign Policy, and Comparative Democratization. On the 6th of April, Echo Raffiche had the chance to meet and interview her. We agreed together not to focus on the events of war, but rather to discuss its side effects on Poland and other EU countries. In particular, we talked about the Polish role in the management of Ukrainian refugees, the relationship between Poland and the EU and the contradictions illustrated by this display of solidarity.

Echo Raffiche: Last year, the EU opened an infringement procedure against Poland for what concerns the rule of law. This led to a rising tension between national and European levels. To what extent could the conflict, together with the crucial role Poland is now playing, change the present and future relationships between Warsaw and Brussels?

Dorota Dakowska: Poland is still at odds with the European Union as far as the rule of law is concerned. The Polish government hoped that the current situation and the Polish support to Ukrainian society and the refugees could change this. During the discussion on the recent Polish law about refugees from Ukraine, there was an attempt to introduce some rules that would guarantee impunity to the government concerning possible braces to the rule of law, but eventually, this did not pass.

As far as today (6th of April, ed.), the EU commission stands that money cannot flow to Poland as far as the necessary reforms of the judiciary are not introduced, as far as the disciplinary chamber is not suppressed.

The second aspect is, of course, that the geopolitical situation has changed. We witnessed far-reaching solidarity between the EU and the Polish Government in October-November when the humanitarian crisis at the Polish-Belarusian border occurred. And today, facing the Russian invasion of Ukraine, the European heads of state and government and EU leaders have managed to reach a common position, which was not easy as far as sanctions are concerned.

This, of course, changes Poland’s perception in the European Union because Poland has accepted to open its border to Ukraine.

We still wait on international coordination to help EU countries on the borders like Romania and other neighbouring countries like Moldova to face this challenge. Moldova, in relative terms, is the country that has accepted most refugees on its territory.

E.R.: Regarding the Polish management of refugees, can we talk about ‘double standards’ insofar as millions of Ukrainians were taken in, while a few thousands of people at the border with Belarus are still deadlocked?

D.D.: This is a bitter experience for NGOs in Poland, which engaged in helping refugees coming from the Middle East mainly from Iraq, Kurdistan, Syria, Afghanistan, from Yemen and some other African countries to a lesser extent. These NGOs were trying to save these people in challenging conditions. Today, like many Polish citizens, they support and welcome refugees from Ukraine. But it is a bitter experience for them to see how welcoming the country is to the refugees from the war in Ukraine and how tough it was to welcome these few thousands of refugees who fled the consequences of Putin’s attack on Syria a few years ago.

The situation on the Polis-Belarusian border was challenging in autumn 2021. Tension appeared in August, when a few dozens of people in exile were blocked in the no-man’s-land between both countries while no authority agreed to provide them with food, drinking water, tents or medication (we spoke about it here). In September, the Polish Government militarised the border, creating a kind of red zone 3km-large where no NGOs, no journalist, no doctor could access. So, it was not a humanitarian approach, it was not legal either, because it was contrary to the Geneve convention. Illegal “pushbacks” became the rule, i.e. the refoulements of migrant people who managed to cross the border in the Białowieża forest (the forest at the border between Poland and Belarus, ed.). And these practices are going on, in 2022. There are still a few families – maybe one or two hundred people – who are left and still trying to cross the border. And the few NGOs and doctors who are trying to help them act in challenging conditions.The paradox is that helping refugees at the polish Belarusian is criminalized, while helping refugees hundreds of kms more to the south, at the polish Ukrainian border, is glorified.

So yes, there are double standards, but Poland is not the only country to practice double standards (we spoke about European hypocrisy here). The Polish government received a lot of support, also in the European Parliament, also from the European People’s Party, the center-right mainstream Christian democrats, and also other parties.

E.R.: For the first time since its creation in 1995, the Temporary Protection Directive was triggered by the European Commission. Originally conceived as an extraordinary measure to be applied in the event of unmanageable migratory flows, the directive provides temporary and automatic protection to all the refugees coming from a geographically-specific area. The directive, created in the aftermath of the Yugoslavian wars, was never triggered before: can we consider its activation as a breakthrough in the field of European migration policy?

D.D.: I am always cautious with (the word, ed.) ‘breakthroughs’, but certainly it is an opportunity. Since 2001, the directive has been considered dead and ‘refrigerated’. Finally, this dreadful war in Europe was the occasion to ‘resuscitate’ it. Probably it was a good occasion to have a system, a flexible system that offers minimum guarantees to the refugees, but, at the same time, it is temporary, so the protection is meant to be given for six months, maybe a year, with the hope that the war would be over.

Now the question is who will be concerned by this temporary protection. It can be a chance if it is considered as a framework that functions and that can be applied to other people that are in exile, but we know at the same time that EU countries are very cautious as far as any migration is concerned. There are fears in this electoral period about the reaction of part of the population who is not willing to welcome any refugee even in this context of war and this has to be taken into account, so I think the governments will still be cautious to call this temporary protection and not to extend it too much.

D.D.: This is undoubtedly an issue and it is clearly an issue in Poland. Things have been upside-down, because there are people who welcome Ukrainian citizens in their houses, an MP who welcomed 11 refugees… it’s a bit ‘who can give more’. But still, what is upside down is that usually the government coordinates and the NGOs work together with the government. In this situation, I think the NGOs have the impression that there is no coordination.

Now I think the great question is what will happen after this élan du Coeur, “outcry from the heart”, and this warm welcome. We already notice a fatigue effect: people can host a family in their flats for some weeks, but then it becomes problematic. Coordination will be needed, more international help from the UN, the EU, from international organizations and NGOs: they are still not very present, not very visible, and not enough in general. I think it is a very big challenge for Poland because of this large number of refugees (around two million) situated in Poland. There were already a million of Ukrainians – not refugees – working in Poland before the war. This explains the proximity, the familiarity, which wasn’t always the case in history and the fact that many Ukrainians who stay in Poland are waiting to see till the war ends, hoping to come back.

This is also an issue in Western countries: how do we stabilize the situation? In Germany there may also be a kind of fatigue because they have already welcomed almost a million of refugees (over a year, not in two weeks like Poland) and we see already that they are having some hardship in welcoming there.

E.R.: Along this line, can Poland be considered as a virtuous example regarding this sense of ‘closer community’ displayed towards Ukrainian people? Is it something that we must learn from?

D.D.: Difficult to say because Poland was not always an example: just four months before (the war, ed.) there was this harsh and cold reaction to people from the Middle East and many racist reactions. I don’t think the conservative government can be considered exemplary. Maybe there is a momentum when people can try to prove something, perhaps a sense of humanity.

Each country has a temporality when citizens feel ‘this is the time for us to act now’. This seems to be the case in Poland, and many other countries; Moldova is probably also exemplary: almost 400,000 fled through Moldova to go somewhere else then. Romania also is doing its best; the Czech Republic is showing solidarity. Finland opened its universities to students from Ukraine. So many countries are now being or trying to be exemplary because of the horrors we are witnessing in Butscha, Irpin, Borodianka, Mariupol and other cities.